Lakers Split Pair of Games Over the Weekend

The Lakers came out flying with the league's leading goal scorer 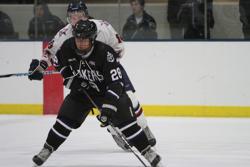 The third period was the Ryan Sete show. He added on three more goals giving him four total for the game as the Lakers ran away with it winning the game 10-0. Photo Courtesy of Russ Eastburn/ESP1000 /Eastburn-Images

On Friday night the Edina Lakers couldn't overcome a slow start, falling to
Hudson at MN Made Ice Arena. The Crusaders jumped out to a quick 2-0 lead
after the first period and the home team could not recover. The Lakers
battled back in the third period with two goals but were unable to tie the
game, even with out-shooting Hudson 51 to 30 in the game and 18 to 7 in the
final frame.

Coach Matt Acker explained after the game, "We can't start slow and win
hockey games. When we play well in the first period, we are effective and
win games. We didn't do that tonight."  It was the first of six meetings
between the two teams.

Saturday night was a different story as the Edina Lakers traveled up to
Isanti to take on a young Owls team. It was already the third match up
between the two teams with the Lakers winning the first meeting and the Owls
taking the second in a shootout. The Lakers came out flying with the
league's leading goal scorer (Semen Ivanov) netting two in the first ten
minutes and sending the Lakers into the locker room with a 2-0 lead after
one period. The second period was more of the same with Edina getting three
more unanswered goals (one by Michael Pederson, another by Brad Johnson and
the final one of the period by Ryan Sete).

The third period was the Ryan Sete show. He added on three more goals giving
him four total for the game as the Lakers ran away with it winning the game
10-0. The win moved the Lakers record to 8-7-1 on the season for 17 points.

The Lakers play at Maple Grove next Friday, November 2, and the Owls on
Sunday, November 4, at home at MN Made Ice Arena at 5:30 PM.

See Images of Ryan in a slideshow below..