Lakers Drop 2 of 3 Games Over Weekend

Then the Lights exploded for three late goals 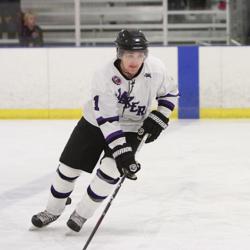 Lakers’ Jarod Sabaska answered back late in the period to tie the score at one after one. . Photo courtesy of Russ Eastburn/ESP1000

The Edina Lakers had a trio of games this past weekend against some of the MNJHL’s toughest competition.

On Friday night, the Lakers traveled to Wakota Arena is South St. Paul to take on the leagues’ top team the Twin Cities Northern Lights. Initially, the game was relatively uneventful with the Northern Lights taking a 2-0 advantage into the third period. But then the scoring picked up. The Lakers got a goal from defenseman Ian Thoennes with a little over six minutes left to make it a one goal game. Then the Lights exploded for three late goals, including an empty netter, to put the visiting Lakers away. Tanor Bradison had 30 saves in the loss.

On Saturday the Maple Grove Energy came to MN Made to face the Lakers the third time this season. The Lakers won the previous two meetings and the same would hold true on Saturday. The Energy jumped out to a quick one goal lead in the first priod.  Lakers’ Jarod Sabaska answered back late in the period to tie the score at one after one. In the second period, the league’s top goal scorer, Semen Ivanov, took advantage of a loose puck in front of the net to put his team up 2-1. In the third, Edina’s captain, Brad Johnson buried a pair and Dakota Yackel scored his first junior career junior goal to put the Lakers up for good and secure the game 5-1.

On Sunday the Dells Ducks came to town for only the second match up of the season. The Lakers wish they wouldn’t have come. The Ducks scored five quick goals in the first 12 minutes of the game, chasing Tanor Bradison from the net and putting the Lakers in a huge hole they would never get out of. Although the Lakers battled hard in the final two periods to make the final 6-2, it was over early.

The Lakers travel to Rochester this Saturday, November 17, and Maple Grove Sunday, November 18, before they enjoy a well deserved week off for Thanksgiving. They currently sit in 4th place in the Minnesota division of the MnJHL, with the top four teams making the playoffs.