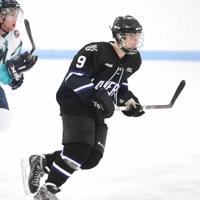 Semen Ivanov had two goals each night to help the Lakers take three of four points from a home and away series with the Minnesota Owls this past weekend.. Photo by Russ Eastburn courtesy of ESP1000

Ivanov has big weekend leading Lakers. Semen Ivanov had two goals each night to help the Lakers take three of four points from a home and away series with the Minnesota Owls this past weekend.

Friday night the Lakers jumped out to a quick 4–0 lead in the first game of the series. Ivanov scored 13 seconds into the game and the Lakers rode the momentum to a 6-3 victory at Minnesota Made. Connor Bodin also chipped in two goals giving him four points in his past four games. The Lakers out-shot the Owls 53-27 in the win.

Saturday night the team traveled to Isanti for the away game of the series. Once again, the Lakers struck first with Ivanov scoring mid-way through the first to give his team a quick lead. The two teams traded goals in the second period with Ivanov, once again, scoring for the Lakers on a nice play from Adam McMasters. The Owls tied the game up late in the third period on an offensive zone face off play sending the game into a penalty filled overtime with more than half of it being played 3 on 3.

After a scoreless overtime period, the Owls took advantage of some questionable decision making by Lakers shoot out participants and won the game 3 to 2.

Lakers’ head coach Joe Long stated after the game, “We need to be ready to play three periods and a full weekend worth of hockey. We leave too many points on the table - not because of our ability - but our lack of desire and competitiveness. Our leaders need to step up in certain situations and keep the team headed in the right direction. We haven’t had that to this point yet.”

The Lakers have two games this upcoming weekend. Friday, for our first trip to the new team, the Steele County Blades, in Owatonna, MN, and Saturday at home against the Rochester Ice Hawks.