“We seem to have gotten out of the little slump we were in coming out of the Wisconsin showcase,” 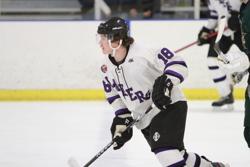 The Edina Lakers had a pair of games last weekend, the first against the Energy in Maple Grove on Friday night. The Lakers jumped out to a quick lead with a power play goal from Adam McMasters when he capitalized on a great passing play by his brother Derek and Semen Ivanov.  In the second period, Ivanov tallied his league leading 21st and 22nd goals of the season giving the Lakers a 3 – 0 lead heading into the final frame. In the third period, the Lakers’ Jared Sabaska got his first career goal on a powerful one-timer, sealing the deal for Edina. The Energy would add a goal late in the game to make the final 4 – 1.

After a day off (Saturday), the Lakers hosted the Owls on Sunday. The Lakers started where they left off scoring early and jumping out to a 2 goal lead after one. Ivanov and captain Brad Johnson scored for Edina in the first. The home team added another in the second and two more in the third to give the Lakers a 5-0 win and a three game winning streak.

“We seem to have gotten out of the little slump we were in coming out of the showcase,” explained head coach Joe Long. “We are getting better defensively every game and Tanor Bradison is playing great.  When we score goals and everyone chips in, we are a tough team.”

Next weekend, the Lakers have three games starting away with the league’s top team, Northern Lights, on Friday, November 9. Then they take on the Energy at home Saturday, November 10, and the Dells Ducks on Sunday, November 11 also at MN Made Ice Center.

The Lakers are now 10-7-1 and are in tied for fourth place in the Minnesota Division.